October 28th ottobre, 5:30PM - Viewconference 2016, Turin (Italy). Rather than present the latest animated films on which he worked - Sausage Party -, Conrad Vernon (Co-director in this movie) tells us about his career, starting when he was a kid

the spark that triggered in him the desire to get closer in the world of animation was in the age of 13 thanks to the animated film "Heavy Metal", or rather its trailer, since for years his mother forbade him to see it because of the many nude or allusive scenes.

The Official Trailer of "Heavy Metal", the film that inspired the Conrad Vernon's career

Going to the University studying arts, it wasn’t good because the activities were often repetitive and not allowed him to express himself as he would have liked.

Then one day one of his teachers told him, "I see that in all your drawings you add some cartoon character, did you ever think you may have an opportunity in the animation?" ... He was surprised about this idea, he never thought before about that, and... where he could try to looking for an opportunity in this field if not at Disney?

So he decided to call Disney Studios to ask if they were interested in a conversation, and there he had the stroke of luck that changed his life: the lady who answered - he never knew who she was - she was very kind and told him that they were not interested about that, but if he wanted to gain experience he could have a look at CalArts (California Institute of Arts), from which many professionals working with them came from.

He Went to visit this Institute and this was a blessing for him: there were people with his same interests and he could start doing what he really felt to do.

His first work was a collaboration in a movie called “Cool World”, who workedas as animator for two years, but after which he remained out of work: not having followed any social events organised by and for professionals like him, he had not created the right network of contacts and thus had great difficulty to find a new project to work on.

After 6-8 months without a new work opportunities, he realized he should not have, nor could totally immerse yourself in his work, because this would have disconnected him from the opportunities which can only be grasped by attending other people, participating in social events, parties, etc.

Finally he find a job in a tv channel, and after a couple of productions he entered the team that nowadays is working for the Simpsons, but after some months he decided to leave his job to focuses his skills in animation movies productions and improve his skills in this area, until he received an offer to work in a project which also included Woody Allen; initially was a little skeptical, then he decided to accept: it was Antz, for Dreamworks.


His pitch liked it so much that the production managers offered him to work immediately on another project that was in development for a couple of years but it was hard to get going, this production was at a standstill, it had already changed two directors and it needed a “shake” to start, or even the investors would abandon the project completely. So he thought about the opening scene of this movie: his pitch was greeted greeted enthusiastically: it was Shrek, one of the movies he loved most.

Then of course he also worked on Shrek 2, which also oversaw the direction, and then also in “Monsters vs. Aliens” and “Madagascar 3”.


Sausage party is a very different movie from its predecessors, because for the first time Conrad Vernon had the possibility to challenge themselves and his skills in a R-rated movie (the film is very allusive and often has a language not suitable for children). But now the time has nearly come to an end, so that Conrad does not dwell much on how it was produced the film, and merely show us a trailer for the movie, and advised us to go see the movie to cinemas. For those that missed it, here is the official trailer . 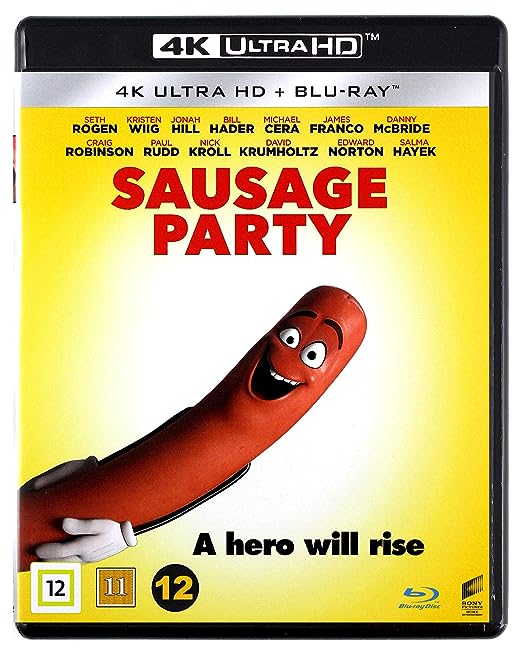