During 2020 I made a completely new 3d model of Goldrake.
Here you can see the result ...

Grendizer in 3d (Goldorak in French) : The first 3D model I made of Grendizer was based on the models I was already developed for other Nagaian robots. The head (still incomplete and to be revised deeply) was added only later, in 2000. First renderings of the robot was made in August 2001 using the same scene used for Baldios and King Star (Calendar Man). But now I decided to deleted the from this page.
During 2020 I completely made a new 3d Grendizer model from scratch, more detailed but with some changes compared to the original anime. The goal is to make a Grendizer version to be 3d printed using with my CR10s. Vega Spaceship: the Vega spaceship is a very simple model, especially because it's symmetrical, so the modeling it has been a very quick process. The spaceship does not has big difficulties, but being formed mainly by rounded elements, for a good reproduction it was necessary to use many polygons. I tried to find the right compromise between the number of polygons and the quality: the model is thus composed of 7,338 polygons. Please if you reading this in 2020 or more, consider that the model was created in December 1999 while the renderings date back to December 1999 / March 2000.

Minidiscs: the Vega minidiscs were made in a short time, although the refinement work was a bit troubled due to the discrepancies in their shape and color in different tv series episodes. The final model is composed of 1,254 polygons, and was completed with both procedural textures (a bit of fractal noise to simulate dirt) and images. In 1975, after the success that the Toei obtained with Mazinga Z and Great Mazinger, it produces the third robotic series created by Go Nagal and it was composed of 74 episodes.
Now the commercial interests of the Toel are a lot,in fact it asked, in a very clear way, to give a very aggressive look to the robot so that the customers could be induced to buy the so many gadgets that the company would have produced. One of the most evident characteristics that show us these demands can be noticed in Goldrake's feet: they are very ugly but if we consider their small dimensions,we think it was easier that a toy could stand. In Italy, it was showed in 1977; in fact it is one of the first robot that were broadcast in Italy, (in the same period I remember that I usual watched Astroganger on our local network) it lacked of three episodes, exactly the 15th, 59th and the 71th.
Surely it is the most loved robot in our country and above all the most remembered but also by the so called not fond of robots , this thanks to the business that there was around this character: for example, sticker albums, toys, records.
Named Ufo Robot Grendizer injapan and in english countries, this serie was named Goldrake in italian and Goldorak in french.
At the end we have to mention Shusuke Kikuchi that wrote the vey fine soundtrack. 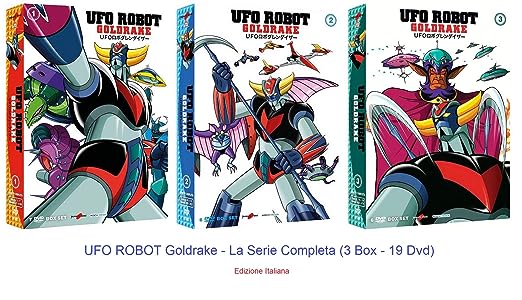